_Our intention is to create a platform that bring together research students, mentors and staff from Environment and Conservation Agencies interested on air pollution effects on Mediterranean ecosystems. Our initial idea is to keep the meeting as a small group although the final number will depend on the amount of people interested.

What is a Mediterranean-type ecosystem?

Mediterranean-type ecosystems are found in five regions of the globe: California, central Chile, Mediterranean Basin, southern Cape region and south western and southern Australia, between 40º and 32º latitude, and where land is influenced by cold offshore ocean currents. The flora of the Mediterranean areas is one of the richest in the world, and annual grasslands, shrublands, dry woodlands and forests are typical. The climate is highly seasonal and characterized by warm, dry summers, i.e., by a seasonal drought, and cool, rainy winters. Spring and autumn are usually the growing seasons. 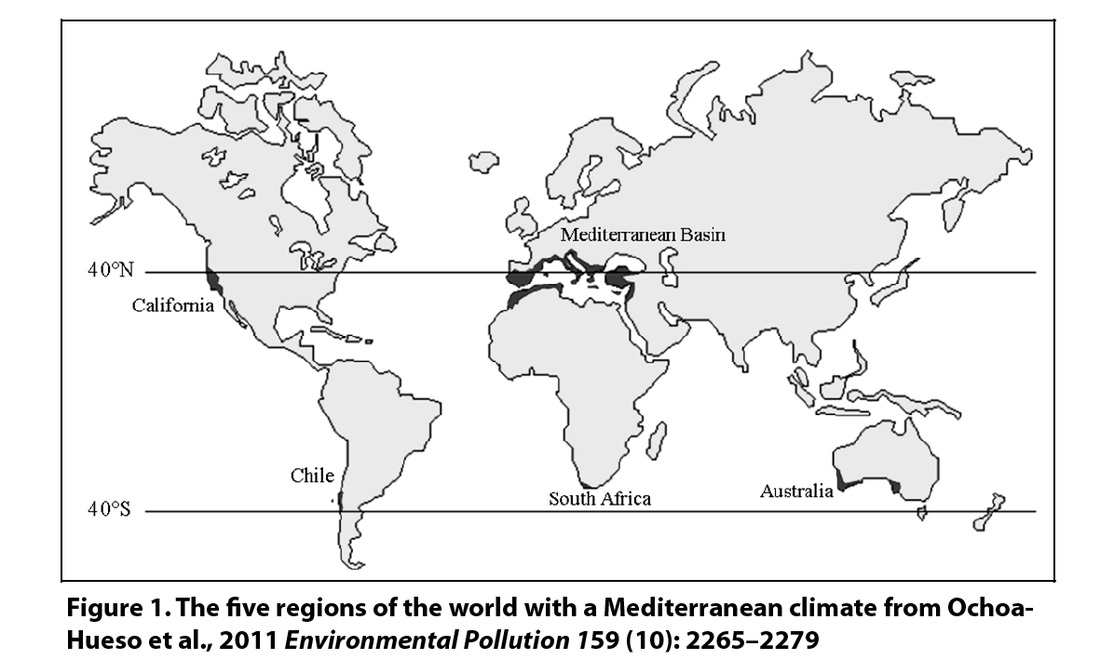 What are the current air pollution threats to Mediterranean-type ecosystems?

The Mediterranean Basin and California are the most populated, and thus impacted, areas with Mediterranean climates. However, the outskirts of Cape City in South Africa and Perth in SW Australia have also seen unprecedented rates of growth during the last years, with consequent impacts on the environment. Therefore, together with land use change, i.e., loss of natural and semi-natural habitats, and climate change, air pollution is increasing in these regions having a major impact on their biodiversity.
Nitrogen deposition effects on Mediterranean ecosystem biodiversity

Dry deposition is usually the main form of atmospheric input in Mediterranean systems and N frequently accumulates in soil and on plant surfaces during dry periods, becoming available as high N concentration pulses with rainfall events. These anthropogenic N inputs, together with the introduction of alien species from other equivalent Mediterranean regions, are currently amongst the main threats to Mediterranean ecosystems, as they usually lead to altered fire cycle and loss of native species as a consequence of competitive exclusion. 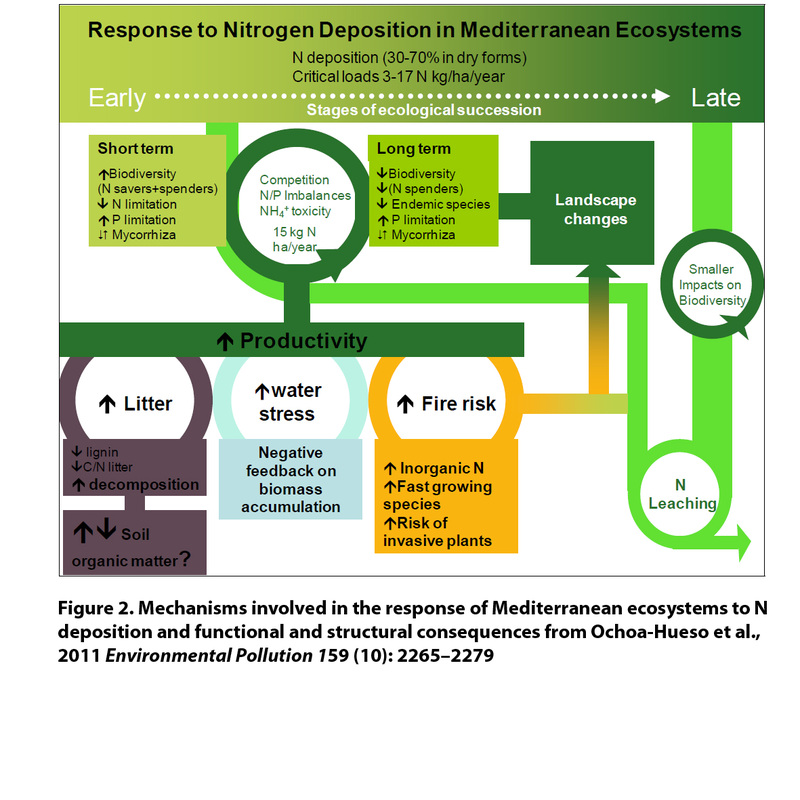 Ozone pollution is especially relevant for the Mediterranean region where climatic conditions favor O3 photochemical formation and persistence. In fact, O3 concentrations in this area frequently exceed the limits established to protect vegetation. Ozone can potentially affect the biodiversity of Southern European ecosystems through both direct effects on natural vegetation, and indirectly, sensitizing plants to other environmental and biotic stresses, or altering biogeochemical cycling, processes subjected to future variations under global change scenarios.

Very limited information is available on O3 sensitivity of individual species or communities taking into account the huge plant biodiversity present in this area. Ozone-induced effects can be variable across different ecosystems and also across species and genotypes within the ecosystem. Due to the ecological and economical importance, field research and experimental studies has been focused on dominant tree species of some representative forests.

Although available information under experimental conditions supports the conclusion that ozone could be affecting plant growth and vitality of some representative species of Mediterranean ecosystems, field validation of O3 effects on growth and biodiversity is still lacking in the Mediterranean Europe. Different O3 sensitivity could be related to changes in the community composition, like those observed in some forests of Southern California associated to air pollution. One important aspect is that the high O3 concentrations frequently registered in the Mediterranean Basin, together with co-occurring environmental factors such as high light and temperature and drought, could have already favoured the selection of populations with increased O3 tolerance. Researches at the University of Copenhagen tested in 1999 the O3 sensitivity of Fagus sylvatica seedlings from different provenances in Europe, showing that photosynthesis, but not growth, was less affected in Southern European than in Northern European plants. Some studies have also reported that previous exposure to elevated O3 can increase the tolerance to the pollutant of grasslands communities. The evolution and geographic distribution of O3 tolerance is difficult to prove and it has not been described yet for many plant species common in Southern European ecosystems, but an O3 induced loss of genetic biodiversity within species can not be disregard. This fact is especially important when it comes to project future O3 effects on species composition and structure based on currently available information. Long-term and/or regional scale studies could help to disentangle the potential effect of population evolution related to O3 effects on genetic biodiversity.

In summary, current knowledge on direct O3 effects on biodiversity in Mediterranean European countries is still too limited to draw firm conclusions and quantifications. Importantly, field validation of effects observed under experimental conditions is still lacking for many species and plant communities. Also indirect effects remain mostly unknown, despite the fact that they are probably of great importance in terms of assessing O3 effects on ecosystem biodiversity.